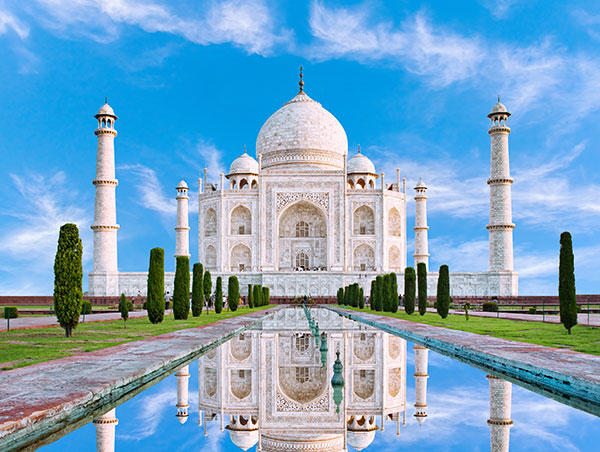 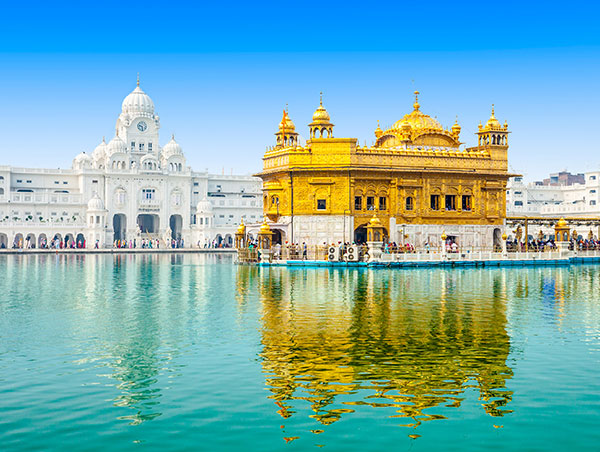 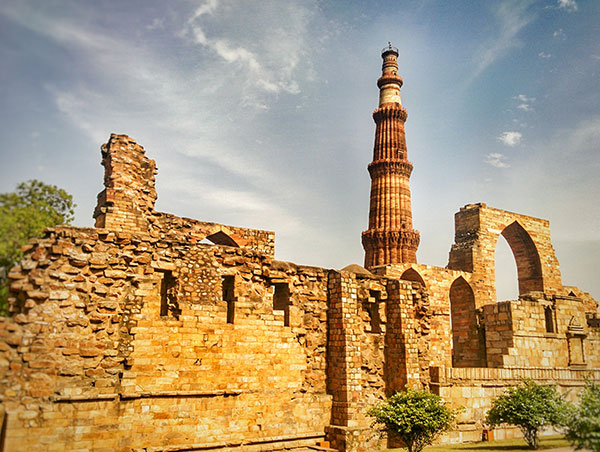 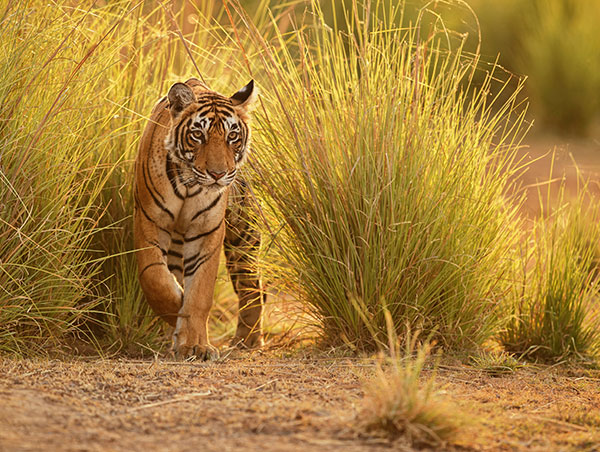 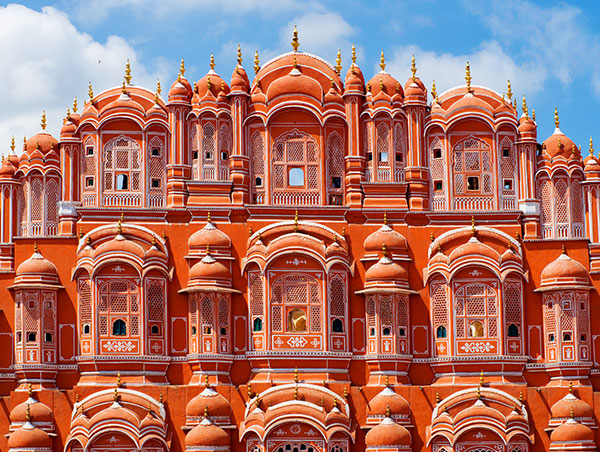 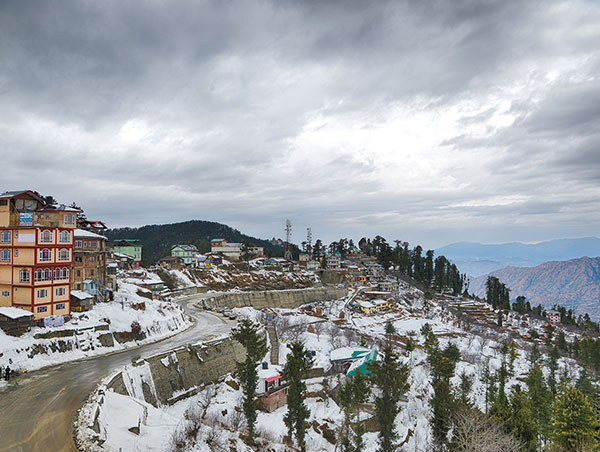 Day 1: Delhi
Upon arrival at the airport, you will be met by your Tour Manager at the airport and transferred to your hotel. 14:00 Hrs standard check in time.

In the evening enjoy the Kingdom of Dreams, a spectacular world of unparalleled imagination, which brings to you a blend of India's culture, heritage, art, crafts, cuisine and performing arts all enhanced by the mind boggling technological wizardry of today. Kingdom has venues of International standard named Nautanki Mahal and Showshaa Theatre for performing arts and there is an avenue with the interesting name of Culture Gully where Indian handicrafts, cuisine and much more are showcased. Overnight stay at your hotel.

Day 2: Delhi
A full day sightseeing tour of Delhi. You will get a feel for this city as you explore its historic sights, such as Raj Ghat, which is located on the banks of the river Yamuna, This is Mahatma Gandhi’s Memorial, where he was cremated following his assassination in January 1948. Opposite the Red Fort lies Jama Masjid, made of red sandstone and white marble, completed in 1656. It is India’s largest mosque. From the Red Fort explore the bustling cultural delight of the colourful market on a 'cycle rickshaw', through "Chandni Chowk", or Silver Street, experiencing the sights and sounds of this very busy avenue, - a truly unique experience. You will have a great view of the Red Fort, a 17th century imposing fortress built in red sandstone and surrounded by a huge boundary wall 33m high. Inside are exquisite palaces and beautiful gardens.

In the afternoon you will head into New Delhi, visiting Humayun’s Tomb, an impressive garden tomb with high arches and a double dome, built by his wife Haji Begum in the 16th Century. An early example of Mughal architecture, considered the predecessor of the Taj Mahal. Then continue on to the wonderful Qutab Minar – a major landmark in Delhi, with its the beautiful grounds featuring the huge tower of victory standing over 72 meters. You will then drive on to Rajpath and through to India Gate and the Lutyens Delhi with its tree lined boulevards leading to the British Viceroy’s Palace, (Rashtrapati Bhavan) now the official residence of the President of India, the Secretariat, India Gate and Parliament House.

Day 3: Delhi to Kalka by train
You will be transferred to New Delhi railway station to board the train for Kalka, departing at 07:40. Local snacks and tea or coffee will be served on board. At 11:45, the train arrives into Kalka railway station.

Upon arrival at Kalka railway station board Toy train for Shimla departs at 1210 Hrs: Toy train offers the charm of old-world travel amidst lofty pines and lush green, misty mountains. Laid out on a 96 km long narrow gauge track that passes through 103 tunnels and across more than 800 bridges and viaducts, it is one of the most beautiful hill railways in India. It was considered the “crown jewel” of the Indian National Railways during British times. 17:30 Hrs: Arrive Shimla railway station. On arrival at Shimla railway station you'll be transferred to hotel.

Shimla:
The ambience of this hill city attracted the British so much that it seemed justifiable to shift the complete administration of an Empire from Calcutta to Shimla every summer because of its colonial charm and cooler air.

Day 4: Shimla
This morning you’ll enjoy a Heritage Walk ,passing through many historical and Heritage buildings, each possessing a different style of architecture and holding many stories of the past. We stop for a break on the way to give you a closer look at the various architectural sites of the British era.

Later you’ll continue your sightseeing of this hill station by visiting the following:

The State Museum (Closed on Mondays):
This building was a private residence of Lord William Beresford, the Military secretary to the viceroys for many years.

Jhaku Temple and Hill (2455 metres.):
This is the town's highest peak and a vantage point for Shimla's famous views. The summit is crowned with a temple dedicated to the monkey God, Hanuman. This also offers a superb view of Shimla and the surrounding snow capped Himalayan peaks and green pastures.

Day 5: Shimla
This morning you’ll enjoy a fabulous excursion to Kufri & Chail. Kufri is around 10 miles from Shimla and is a small hill station. Its name means ‘lake’ in the local language. Further along we reach the beautiful hill station of Chail with its stunning views of the Himalayan foothills. Chail was built as a summer capital by the Maharaja of Patiala, after being exiled from Shimla by Britain’s Lord Kitchener.

After breakfast we drive to Parwanoo. Just a couple of decades ago, this was a sleepy little village but today is a pulsating industrial town. Upon arrival in Parwanoo, transfer from the base to the top of the mountain by cable car. Lunch at Moksha Spa & Resort.

After lunch you’re transferred by cable car from the top of the mountain to the base and drive to Chandigarh railway station in time to board your train, departing at 1710, to Amritsar, a holy city of the Sikh community. The famous Golden Temple was built here between 1589 and 1601 and is a superb coming together of the Islamic and Hindu styles of architecture. This extraordinary building is fashioned from marble, mirror work and gold, which is beautifully reflected in a stunning expanse of water. At 21:25 - arrive Amritsar railway station. Upon arrival at Amritsar railway station you will be transferred to your hotel.

Day 7: Amritsar
This morning you’ll explore the spiritual centre of the Sikh religion, - the Golden Temple. This is one of the most spiritual locations and includes the Divine Temple and the Pool of Nectar. The temple kitchen provides amazing meals every day. You’ll then also visit Jallianwala Bagh, the site of an infamous massacre that took place in 1919. Visitors to the Golden Temple must remove their shoes, wash their feet and cover their heads with a scarf.

In the late afternoon you will travel to Wagah border, where India meets Pakistan, to watch the Flag ceremony, also known as the ‘beating the retreat’ ceremony. Every day of the year at sunset, the soldiers of both India and Pakistan lower their respective flags in unison.

Very early this morning you will be transferred from your hotel to Amritsar railway station in time to board your train for Delhi, departing at 0500. Local snacks, tea, coffee and breakfast will be served on board. At 11:15 - arrive at New Delhi railway station, where you will be met by our driver who will take you straight to the romantic city of Agra. Upon arrival at Agra, check in to your hotel.

Day 9: Agra
After breakfast enjoy visiting the world famous Taj Mahal (closed on Fridays). The Mughal Emperor Shah Jahan, in memory of his favourite wife, Mumtaz Mahal, who died in 1631, built one of the world’s most famous buildings, the ‘Taj Mahal’. Its perfect proportions and exquisite craftsmanship have been described as ‘a vision, a dream, a poem, and a wonder’.

You’ll also visit the 16th century Agra fort. This commanding red sandstone monument stretches for 2.5 kilometres along the banks of River Yamuna, encompassing serene gardens and terraced pavilions, with striking views of the magnificent Taj Mahal across the river, as well as the Tomb of Itmad-ud-Daulah, also known as the ‘Baby Taj’.

In the evening you’ll enjoy a sunset view of the Taj Mahal from Mehtab Bagh, which is a garden complex, situated on the riverbank opposite the Taj Mahal.

Day 10: Agra to Ranthambore by surface, 295 kms, 7 Hrs
After breakfast drive to Ranthambore, en route visit Fatehpur Sikri - the imperial ruins of the dream capital city of the Great Mughal Emperor - Akbar.
Upon arrival at Ranthambore, check in at your hotel

Day 11: Ranthambore
Today we take you searching for tigers on an early morning as well as an afternoon safari game drive in Ranthambore National Park.

Day 12: Ranthambore to Jaipur by surface, 180 kms, 4 Hrs
After breakfast we continue on to Jaipur, the famed ‘Pink City’ and the capital of Rajasthan, known for its palaces, its three hill forts and for being a shopper’s paradise. Upon arrival at Jaipur, check in to your hotel. The evening is at leisure to explore the surrounding area and the colourful bazaar. Overnight stay at the hotel.

Day 13: Jaipur
This morning we take you to Amber, capital of the old state of Dhundhar, which is located on the rugged hills that surround Jaipur. Ride the colourfully painted elephants up the hill, admire the massive gateways, courts, stairways, pillared pavilions and palaces that recall the glory and wealth of Amber’s association with the Mughals. During the afternoon visit the City Palace (which still houses the erstwhile Royal family); Jantar Mantar, the Royal Observatory and Hawa Mahal (Palace of Winds) - built for the royal ladies to watch the activities on the market street below, without being observed. Overnight stay at your hotel.

Day 14: Jaipur to Delhi by surface, 258 kms / 6 Hrs
After breakfast drive to Delhi. Upon arrival at Delhi, check in at hotel. Overnight stay at hotel.

Day 15: Depart Delhi
Transfer from your hotel to Delhi airport in time to board your flight to onward journey.